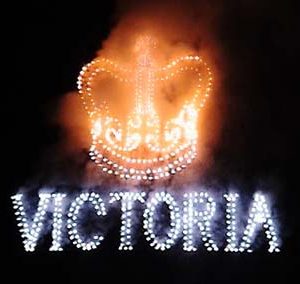 Firework ” Lancework ” is a traditional form of depicting firework images, symbols, logos or writing in a dot-to-dot style using a lance for each “dot”.

Firework lances are small cigarette sized tubes filled with a slow burning colour composition that is designed to produce a small but brightly burning flame.

A thin flexible cane is used first to create the image or lettering and this is fixed to a wooden framework. The firework lances are then fixed to the cane every few centimetres and are all linked together with a fast burning fuse.  When the fuse is lit all of the lances are ignited and the image becomes immediately visible and will last usually for sixty seconds. Lancework offers instant ignition, unlike Fire writing or Fire sculpture which need at least a minute to light fully.    Lances can be made in a range of colours, most popular being Red, Green, Blue, Amber, White, Pink, Orange.

Colour changing lances are also possible where the lance is filled with two colour compositions so that the flame changes colour part way through the burn.

Lettering can be made from a single line of lances or using a double line of lances to simulate a block letter.  The cane can be shaped like a font so the image can follow a lettering style.  Lancework lettering usually ranges in size from 0.6m high, more usually 1m but can be made substantially larger where required.

Lancework is often used to display Company names and brand images. Names and or numerals can be made for significant birthdays and anniversaries and for Wedding Displays we are often asked to depict the Bride and Grooms Initials set either side of a big Red Heart.

All of our lancework is bespoke and made to order and prices will depend upon the size and complexity of the image. Images are usually erected on poles but larger images may require Scaffolding, mechanical lifts or even a crane to hoist them aloft. 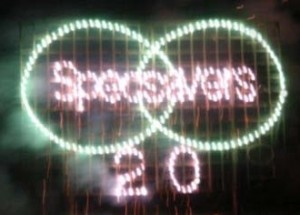